Do Google’s Algorithms use Scientific Consensus to Censor Health Content?

Google didn’t nickname it “Medic“, people in the SEO industry did. While it is a very fitting name, the algorithm also affected a huge variety of niches including finance, news, sports, business, fitness, travel and more. It would later become known that this was what Google calls a Broad Core Algorithm Update. This type of core update is basically Google rolling out several changes all at once in an effort to get people to “the most relevant results”. Of course, any good search engine is always trying to improve.

When the update hit, I was contacted by *hundreds* of webmasters. Some of these sites were small eCommerce sites selling herbal remedies, and other sites are internationally known household names. But they all had something in common – a huge loss in traffic.

Google’s core algorithm is updated frequently and when sites have content about mental health, dietary needs, drug rehabilitation, alternative medicine, herbal remedies, physical fitness, they may be impacted. Some updates affect only one or two of these niches, other updates impact all niches at once.

The big question is: how is Google currently assessing alternative health content? And are they looking at medical or scientific “consensus”?

When the June 3, 2019 Google Broad Core Update hit, I analyzed several websites. I had also pulled together a list of sites which lost the most traffic. Mercola.com was one of them:

After the algorithm hit, Dr. Mercola mentioned us in an article Google buries Mercola in their latest search engine update. In the article, Mercola points out that his site lost ranking for certain terms such as “type 2 diabetes”. He also theorizes that “Google is now manually lowering the ranking of undesirable content, largely based on Wikipedia’s assessment of the author or site.” Since then, I’ve had a ton of questions about scientific consensus and Google’s algorithms, which is why I am writing this article.

First of all, two points:

With the established, let’s look at quotes from Google.

Machines can’t tell the “accuracy” of content. Our systems rely instead on signals we find align with relevancy of topic and authority.

For YMYL topics, there is a high standard for accuracy and well-established medical/scientific/historical consensus where such consensus exists.

High E-A-T information pages on scientific topics should be produced by people or organizations with appropriate scientific expertise and represent well-established scientific consensus on issues where such consensus exists.

And that the LOWEST quality pages contradict expert consensus:

So what does this mean?

According to Google, the QRG is NOT used to rank websites. It is, however, used to test the desired outcome of algorithms. In other words, Google is testing the algorithm using human raters to make sure sites ranking display the medical consensus.

At least, that’s my takeaway. In other words: Google can’t evaluate content based on medical consensus, however, they can indeed tweak algorithms in an effort to make sites show up which display a medical consensus.

What if the scientific consensus is WRONG?

Not long ago… Doctors told us smoking was just fine. 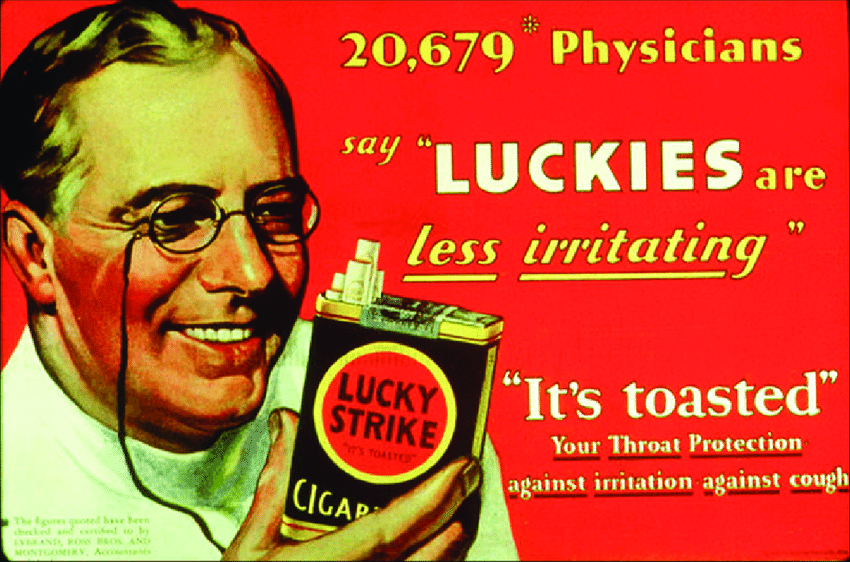 Roundup is a toxic chemical that kills living things. You don’t have to be a genius to understand you should not swallow it, do you? Well, our buddies at the EPA say it’s just fine (source: EPA “glyphosate is not likely to be carcinogenic to humans”). Is it ok in small amounts? I don’t know, I’m just an SEO guy on a laptop. But, I do know the World Health Organization’s International Agency for Research on Cancer says glyphosate is “probably carcinogenic to humans”, and I do know that attorneys are suing Monsanto when their Roundup-using clients are getting non-Hodgkin’s lymphoma.

Here are some things the medical community has gotten wrong in the not-so-distant past:

So, while I am not running around with a tinfoil hat on and shouting at the clouds, I do indeed eat local, sustainable foods which aren’t sprayed with herbicides.

What about alternative medicines which work?

I have been contacted by a ton of website owners pushing affiliate sales. Generally speaking, they have a crummy website which should not rank. So, I think most of Google’s efforts have been good. There’s an enormous number of people out there buying Green Tea pills from Amazon because some website threw together some pages which tell them they could remedy their ailments with silly herbs. That said, some alternative medicines work!

Have you ever heard about Sister Kenny? For decades she healed people with Polio using hot compresses and massage while the medical community put children in casts and braces.

And unless you’ve been living under a rock you know that there’s a huge opioid epidemic and of course a totally unnecessary amount of antibiotics being prescribed.

The truth is, lots of alternative medicines work! Should people be able to discover this while searching? Is Google deciding what we see for us?

Here are some wacky things doctors do (in my opinion):

Can an algorithm differentiate all of these things? Probably not! All kinds of good sites get whacked in algorithm updates. Examine.com was recently whacked and they have a wonderful site. Thankfully, it reverted after a painful wait during the October 23, 2019 update.

Google’s algorithms indeed influence what shows up in Top Stories and in Google News feeds. But are they censoring health news specifically? I don’t know. When news breaks, they do display news from their most trusted sources first. Some of those sources include CNN, ABC and NBC.

On November 8, 2019, Mercola published an article called Shocking Proof How Google Censors Health News. In the article, he points out that Google backed Vaccitech is working on a unversal flu vaccine. Well, wait until Dr. Mercola sees reads about Google’s Project Nightingale.

Today, November 11, 2019, The Wall Street Journal wrote an article about Project Nightingale which explains that Google is collecting health records on millions of people without their knowledge.

The data involved in Project Nightingale includes your name, your date of birth, your lab results, doctor diagnoses, hospitalization records and your complete health history. The news comes hot on the heels of Google acquiring fitbit…

This is pretty scary stuff, especially since Google just recently got caught covering up a massive data breach in 2018.

So while I don’t know if Google is censoring health news, I can tell you if there is health news, you’ll definitely see CNN’s coverage and not Mercola’s.

As for Mercola making the case of not trusting Google, well, they are really doing it to themselves lately. Covering up data breaches is not cool, and then to follow that up be accessing your medical records without telling you or your doctor is not just cringey and creepy, it is unacceptable.

Does Mercola’s site have technical problems?

I haven’t done a deep dive as it is such a massive site, however, Mercola points out that some of his content has been copied. That’s true. If you Google a sentence in quotes, such as “Rheumatoid arthritis affects about one percent of our population and at least two million Americans have definite or classical rheumatoid arthritis” you’ll see several sites duplicating his content. They do outrank his site, but, it’s likely due to the site’s current status. Still, it’s an issue which should be remedied via DMCA takedowns.

By the way, here’s a site which lost traffic due to copied content:

I did just notice this hilarious site title as I am typing this article though! 🙂

Does Google use Wikipedia?

Ok, so I think the Doctor is sort of onto something here. Not everyone in the SEO world is going to agree with this, but here it goes…

As mentioned above, Google is probably NOT directly evaluating content.

And that would mean they’re not comparing it to Wikipedia content.

However, Google DOES look at entities. Now this could be a book all in its own. But to make an extremely long story short, Google could indeed use Wikidata to judge an entity’s authority. Mayo Clinic’s Wikidata entry (Q1130172) clearly shows that Mayo Clinic is a research institute, that it is in the healthcare industry, that it’s a non-profit, etc. Mercola, the company, has no Wikidata entry, but Dr. Jospeh Mercola does, and it isn’t pretty. I am not stating any of this is true and I haven’t looked into it, but his Wikidata page identifies him as a person and an anti-vaccine activist. I don’t know what that’s all about – a quick scan of his site led me to a page of about Bordetella, and I completely agree with Mercola here (I’m sure I am missing something controversial here, but it’s far beyond the scope of this article).