The Republic of the Philippines is a sovereign democratic nation consisting of more than 7,200 islands in the western Pacific Ocean. It’s three geographical divisions are the islands of Luzon, the Visayas and Mindanao. The country’s three largest cities are Manila on Luzon, Cebu in the Visayas and Davao City on the southeast coast of Mindanao. The overall population of the nation is about 101 million, and more than 80 percent of that population is Roman Catholic. The last government census in 2010 showed a Muslim population of about 5.5 percent.

Mindanao is the southernmost island group of the Philippines. Its 66,000 square miles are inhabited by about 22 million people. Davao is the largest city on Mindanao with a population of about 1.7 million people. Parts of western Mindanao have a predominately Muslim population. They’re often referred to as a lawless and autonomous region.

Martial law is ordinarily declared by a government when an area is affected by a temporary emergency or wartime military operation. It might be declared over an entire country or just an area of that country. Management of governmental functions that are ordinarily civilian in nature are delegated to the military. By doing that, the military can maintain control over citizens and residents. Martial law involves travel restrictions, curfews and armed troops on the streets. Both civil rights and criminal rights like habeas corpus are suspended, and military courts are used in the prosecution of citizens who are accused of breaking martial law. The Republic of the Philippines is no stranger to martial law.

The first modern proclamation of martial law in the Philippines

On September 21, 1972, after a month of bombings, lawlessness and assassination attempts on politicians, President Ferdinand Marcos declared martial law over the entire Republic of the Philippines. The nation’s constitution and congress were both dissolved by proclamation. Media companies that were critical of Marcos were shut down, and individuals who were critical of Marcos were arrested. Economic reforms were undertaken pursuant to presidential decree, and the country’s gross domestic product quadrupled through 1980. Marcos lifted martial law on January 17, 1981.

On December 4, 2009, President Gloria Macapagal Arroyo declared martial law in the mostly lawless western Mindanao province of Maguindanao after a political candidate and 57 journalists and supporters were murdered while on their way to file a certificate of candidacy for an elected office. The candidate was running against an Ampatuan family member which was one of the nation’s most powerful Muslim clans. Those who died in the massacre included the candidate, his wife and two sisters, at least 34 journalists and independent motorists who witnessed the killings. Some of the female victims were reportedly raped, shot in the genitals and beheaded. Two were pregnant. Upon learning of the massacre, President Arroyo declared martial law in Maguindanao. After separating the Ampatuan family from their automatic weapons, 330,000 rounds of NATO ammunition, a Humvee and an armored vehicle, 20 Ampatuan clan members and militiamen were taken into custody. The martial law proclamation was short-lived, and it was lifted on December 13, 2009. Cell phone and internet services were unaffected.

The visit of Pope Francis

Pope Francis visited the Republic of the Philippines from January 15 to January 19, 2015. His itinerary included Manila and two cities on the island of Leyte that had been flattened and flooded by Typhoon Yolanda. Upon returning to Manila, more than 6 million people attended his Luneta Stadium mass. President Benigno Aquino, III mobilized nearly 40,000 police and military personnel for the protection of Pope Francis. Sometime prior to his visit, a plot to detonate an explosive on the papal route through Manila was discovered. The bombing plot that was uncovered prompted governmental security forces to purposefully jam cellular signals anywhere near where Pope Francis visited. Internet signals were also dialed down. The public was made aware of these security measures before they were implemented.

Internet in the Philippines

Three companies carry more than 90 percent of the internet signals in the Philippines. Those are PLDT (Philippines Long Distance Telephone Company), Globe and Smart. Most Filipinos can’t afford PLDT service, so they use a pocket wifi with a SIM card sold through either Globe or Smart. Regardless of what service Filipinos use, there’s a strong international consensus that internet speed in the Philippines is the slowest in Asia. It doesn’t take much to dial it down even more either, especially for the protection of Pope Francis in a country with a history of political murders and bombings like the Philippines. That’s exactly what PLDT, Globe and Smart did for five days. For security reasons, the internet in the Philippines became just about impossible to use. The government gave cellular and internet users fair advance warning though.

On May 23, 2017, President Rodrigo Duterte placed Mindanao and all of its islands under martial law. During the week before the proclamation, firefights and skirmishes between government troops and the insurgent Maute Group that is aligned with ISIS had escalated in Marawi City. Davao City is located about 200 miles southeast of Marawi City. Foreign fighters from Indonesia and Malaysia joined local Maute rebels. The insurgents burned a church, hospital and school while taking hostages. Christians were systematically murdered and dumped in ravines. Marawi City’s chief of police was captured and assassinated. The insurgents successfully freed more than 100 prisoners from a local jail. Most of the Maute Group rebels have been killed through street fighting, air and artillery attacks. Although the number of rebels that are still alive has diminished daily, one local Catholic priest reports that the remaining Maute fighters might be holding up to 200 hostages.

In contrast, just about everything works in Davao City. The city has very little crime. In 2016, it was rated the fifth safest city in all of Asia and one of the top cities in the world to retire in. Davao City is generally prosperous. Many modern shopping malls dot the city, and a number of luxury condominium and housing developments are scattered throughout the metropolitan area. It’s also the hometown of President Rodrigo Duterte who returns to his rather ordinary and humble home on a weekly basis. Duterte is the former no-nonsense mayor of Davao City who ruled the city with an iron fist for 22 years. He remains the reason why Davao City enjoys an incredibly low crime rate. His daughter Sara is now the mayor, and his son Paolo is the vice mayor. When Sara Duterte disagreed with the chief of police on the timing of bulldozing a squatter area, she literally punched him in the nose with video cameras running. To date, she still hasn’t been prosecuted for the attack. 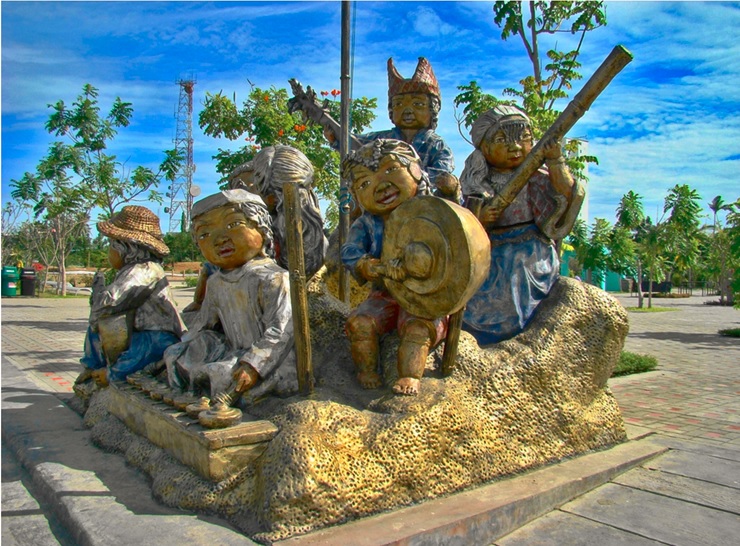 On September 2, 2016, a bomb exploded at a crowded night market in Davao City. It left 15 people dead and 70 injured. Within a month, 10 people were arrested. Three of them were from the Maute Group. All units of the Philippines National Police were placed on high alert. Police and military were immediately dispatched to Davao to set up checkpoints, search vehicles and search homes. Davao City was locked down for about two weeks after that. So was the internet. For more than a week, it became even slower than its usual and customary painfully slow speed. There were times when getting a signal was impossible. It was obvious that the government didn’t want the bombing conspirators communicating over the internet.

Life in Davao City goes on

Pope Francis has come and gone. Cell phone and internet services were restored as soon as he left. Davao City remains a safe city to live in and retire in. Rodrigo Duterte made it like that, and there’s no doubt that his family will keep it like that. Other than checkpoints and roadblocks when entering or leaving the city, there’s no unusual police or military presence on the streets at all. As opposed to dialing down the internet during the visit of Pope Francis, there’s been no advance notice of the government’s intention to slow the internet down even more or block access to it. That’s because all of Mindanao including Davao City is under martial law. The government doesn’t have to give advance notice about anything. You simply obey commands, or you stand a high risk of going to jail.

Life in Davao City goes on, and regardless of martial law being declared, it’s business as usual. Davao City takes care of itself, but martial law can now control the internet. If fighting flares up again 200 miles away in Marawi or any other city on Mindanao, Davao residents can expect internet service to go down again to next to nothing. One of the best cities in all of Asia won’t even be able to stay in touch with the rest of the world. President Duterte has stated that if terrorist attacks continue north to the Visayas and Luzon, he will declare martial law across the entire country. That would be a tragedy. An entire Asian nation might lose touch with the rest of the world.