I rarely use Yahoo but when I do visit I am always surprised by their front page. I personally believe that it is configured in a way to trick users to clicking on sponsored content which is blended in with the news headlines. I’ve been online since 1988 and seen it all and I completely understand that websites need to make money. However, Yahoo is a search engine and people have a certain amount of trust they place in search engines. Is Yahoo taking advantage of this trust?

Here’s a screenshot from the Yahoo home page as of August 24, 2017. If you look really close you can see that the “Do this everyday before you turn off your computer” is sponsored content: 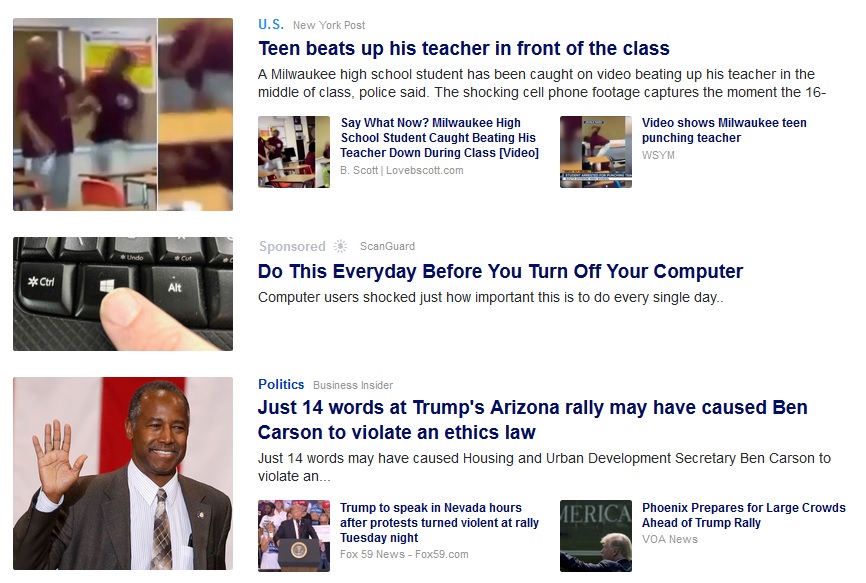 The problem here is that the majority of average Internet users aren’t going to notice the “Sponsored” text and even if they do they have no idea what that means. To make matters worse that is NOT a tip to help you turn off your computer.

Today someone left a comment on an article I wrote about a testosterone scam: “Ultimate Testo Explosion Scam“. This is basically an ad that pops up around the web with some sort of testosterone boosting pill or something. People click it and see that Shark Tank likes it or something to that effect and order a bottle. However, users are tricked into signing up for a $100/mo service.

Just saw this AD on YAHOO. It was listed as one of their top five stories but was actually an AD. You know, more important than News that actually affects the world. I read on and googled the “reporter’s” name, (Karen Brightwell. Published on Tuesday, August 22, 2017)and found this link. It’s funny how YAHOO won’t retract this bogus AD. I suppose they need the money more than they need to tell the truth. The logo used in her “story” uses a look-a-like FOX News logo. Very diabolical method to separate your money from your wallet.

After seeing Randy’s comment, I decided to check out Yahoo’s home page for myself, which is when I discovered the computer trick ad as seen above.

Now if you click on the “Do this everyday before you turn off your computer” sponsored link you are taken to a page which tries to sell you Scanguard. Scanguard is supposed to be a virus scanner. According to Online Threat Alerts, his is a software which tells people they have a virus and need to pay them to remove it. MalewareLess points out that this software disables legitimate Antivirus software and tells you that you have viruses, and Trojan-Killer.com calls it Malware as well.

In the IT world, fake antivirus programs are called “Scareware” or “Roguewear”. Dictionary.com defines Scareware as “software that is sold as computer security or as an antivirus or other utility program but is either useless or is itself malware”. The Federal Trade Commission has a page on scareware in an effort to protect consumers.

Why are these advertisements being displayed on Yahoo?

Yahoo is using an ad network which rotates ads. Unfortunately, many of the ads being displayed on Yahoo are clearly not in their user’s best interests. I never did get around to looking at the code although common ad networks companies use include Taboola and Outbrain.

Were you tricked by an ad on the Yahoo home page?

Do you think that the ads on Yahoo’s home page are deceptive and malicious?

Were you a victim of a scam that was displayed on the home page? If so, how much money did you lose on it?

If you have had a poor user experience on Yahoo.com, please tell us about it below.