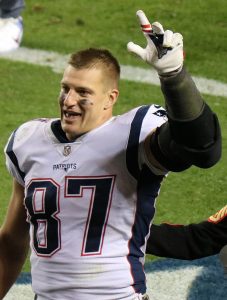 People everywhere are being redirected to fake, lookalike websites from legitimate news websites. They click on a link which appears to be part of the news website and next thing you know, they’re on a fake site reading a fake story by companies and affiliate marketers trying to trick people into signing up for a $90/month subscription.

The content below comes from Shane Wilcutt. Shane emailed me with such great detail I decided to publish their story here (with their permission). Shane had found my documentation of a very similar scam here for a testosterone pill: Fake Fox News & Shark Tank Content Showing on CNN.com.

Early this AM I placed an order for a free sample of Primal XL, which I was directed to through the latest “fake news” story about Rob Gronkowski’s supposed suspension for using performance enhancing drugs.  I’m a huge Patriots fan and was initially drawn in out of concern for my team.  We need the Gronk!
Anyway, I ultimately (and stupidly) ordered a free sample of the Primal XL product, for a modest shipping charge of $4.95.  I had to navigate through a couple of additional screens after providing my CC info, and when it was all said and done, my order had been confirmed for one free sample of Primal XL, $4.95 S&H, a free sample of Primal Male, $4,90 S&H, and an additional charge for $1.95 which was itemized as Insurance.  I did not sign on for the latter two charges, and that was the first sign that something was wrong.

Soon after I placed my order, I received an email receipt confirming my order.  It was a generic form, with no identifying information related to the company except © Primal XL.  This was the second red flag, and it got my attention.

I proceeded to search the internet and ultimately found the article you wrote in February 2017, almost exactly a year ago.  I can’t believe they’ve been getting away with this for so long.  After reading the extensive list of comments at the end of your post, I realized that I had to take action.  I’m a graduate student and single parent of a 16 year-old, and we have been living off student loans for about 18 months now.  It has not been easy, but we’ve managed to get by.  All of this is to say that I can’t afford to be scammed.

My first action was to send an email to “Primal XL’s” customer support email address.  I quickly decided that wasn’t good enough.  I did some more digging and found a customer support hotline number.  When all was said and done, I made four phone calls over the span of about an hour.  As I peeled back the layers, I was shocked and appalled with the complexity of this scam and the anonymity of the company that is running it.  Here’s what I ultimately discovered:

All of these minor details may be excessive, but I feel compelled to tell someone my story, and I suspect that you will appreciate it.  In the age of electronic transactions and blatantly deceptive advertising campaigns, someone has to stand up for the little guy.  My story is a perfect illustration of the patience, diligence, and knowledge of the system which is necessary to protect yourself.  Unfortunately, I fear that I am among a very small minority of people who know how to advocate from themselves (my graduate degree will be a Master’s in Social Work).  That’s why I have such a tremendous amount of respect for the work that you do.  IMHO, consumer protection work represents a vitally important check on a capitalist system which has gone off the rails and is completely out of control.  I’m quite sure that, after all this time, such a scam can only continue because it is technically legal, achieved by carefully manipulating the loopholes that inevitably exist in our Federal laws.

If there’s one thing I’ve learned in my time as a graduate student, it’s that you have to pick your battles.  As much as I’d love to right all of the wrongs in this world, if I get too fired up and take things too personally, I am bound to burn out quickly.  I’m still learning to accept this reality, as evidenced by this communication.  However, I can’t help wonder if something more can be done.

On that note, I was hoping you might provide me with some insight.  If one were so inclined, who might they contact to file a grievance?  I’m certain that no one incident will lead to meaningful action, but I have to hold out hope that cumulatively, if enough people voice their concerns, maybe something can be done to stop the unscrupulous and predatory practices which are running rampant in our country.  I know I can’t set the world on fire by myself, but I’ll be damned if I’m don’t do my part, whatever that may be.

Thanks in advance for your diligence, your dedication, and your time.  If you are able to respond to this message, I would greatly appreciate it.

Thank you Shane. I have been online since 1988 and love Internet marketing, but this is just taking advantage of people. I don’t know how some people sleep at night. Every once in a while I’ll document a scam or some fake news that I run into on the Internet. Your email was so detailed I just had to put it online for the world to see.

How To File a Complaint

Over the years I have definitely had my problems with online businesses and there are indeed some steps anyone can take to file a complaint.

How did you get to it? Which website were you on when you saw the advertisement? Do you have a similar story to share?