There is some buzz in the SEO industry that there has been an algorithm update to Google in February 2017. Indeed, SERP tracking tools such as Mozcast and RankRanger do show some fluctuations in results.

If your site dropped in the rankings this month, I would be happy to look at it for you, just email me.

The rumors began on a Black Hat forum and some felt that they were losing rankings due to obtaining links through PBNs. This is entirely possible, however this kind of thing happens every day.

Here is a screenshot from RankRanger which shows that there was some movement: 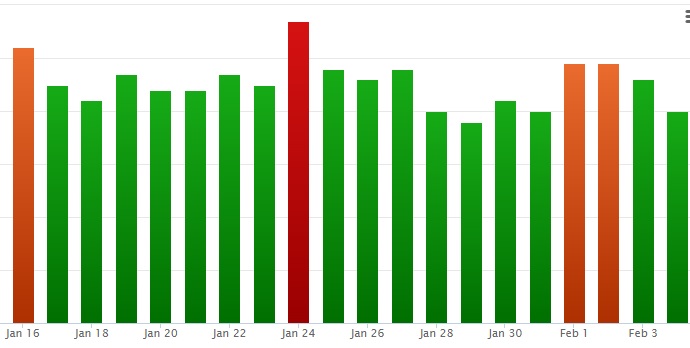 Was there an algorithm update in February 2017?

The algorithm is changed all the time. So, yes, there was an update.

I do not personally believe there was any major algorithm change though. In all the niches I monitor I have seen almost no movement whatsoever. Then again, I mostly monitor legitimate business websites which do not participate in gaming the system. Of course, as the chart above shows, there was indeed some changes, but search results change all the time.

I did look at some sites which I am aware of that rank great specifically due to PBNs and they were unscathed. These sites are glaringly obvious, too, as they all have the same anchor text from dozens of crummy little 2 page sites which just link out to target sites.

Even if there was no large algorithm change, there can still be major shifts in search causing tens of thousands of websites to move down in the rankings. Of course, every time someone moves down, someone else moves up.

There are other factors at play here, too. Google has been adjusting rankings for sites based on their mobile content and also shifting things around for sites which use pop-ups and interstitials (ref: Pop up penalty).

It appears that on February 7, 2017 a number of websites were yet again impacted by another separate algorithm change.

April 8, 2017- I am today adding this section as there was definitely a February 7, 2017 update. I had no data before but last week a new client reached out who had been affected. I discovered several “quality” issues and we are making changed. When this particular algorithm is refreshed I will update any findings here. Here is a screenshot of their sudden decline in traffic. Yes, the traffic is a bit choppy as it is a political oriented website:

Screenshot of a traffic loss from the February 7, 2017 algorithm update.

Did your rankings change in February 2017?

If your rankings changed I would like to hear from you. Either email me or drop a comment below.

If there are any other major changes in Google Search Results this month I will update this article.