On September 1, 2017, the remnants of Hurricane Harvey were passing through central North Carolina after devastating Texas and blew the transformer out on my property a few acres away from my house. So, we went out for a drive. We are near the new development of Chatham Park and I drove by that, got something to eat, walked around a few stores and were just out looking for the unknown when we found it. My wife spotted an albino deer, or more likely a piebald deer, not sure which but it was indeed a solid white whitetail deer fawn. I quickly turned the truck around and stopped in the median of the road to get a cell phone pic and we saw a solid black deer.

My wife saw it first and I told her there are no such thing as black deer. I was wrong. There was a freaking black deer there. I squinted and thought that it was just a shadow, then I thought it was a goat, then a black dog, then it moved and was eating grass, then it nibbled on the tree above it and followed along with mom and the albino. I couldn’t believe it. A BLACK WHITETAIL DEER!

I Googled it and the first thing I found was a Snopes article informing me that I am not crazy. The black whitetail deer is called a melanistic or melanic deer. According to North American Whitetail, “their bodies produce far too much of the hair, skin and retina pigment known as melanin”.

Did the mom have a black deer and a white deer?
Are they twins or are these fawns from 2 separate mothers?

Does the same gene create both melanistic and piebald or albino deer?
Unknown. Researchers do not know the answers to this question.

Please feel free to use these images, just be sure to reference this article as your source. I want everyone to see these images.

Sorry in advance that these pictures aren’t perfect, we did the best we could with a Samsung Galaxy S7 zoomed in from a roadway before the black deer disappeared back into the woods. I have been searching for this deer again daily and yes I have a high resolution camera in my vehicle now. 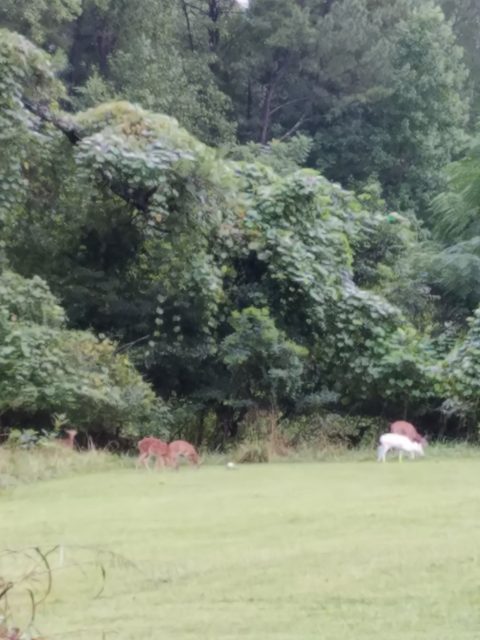 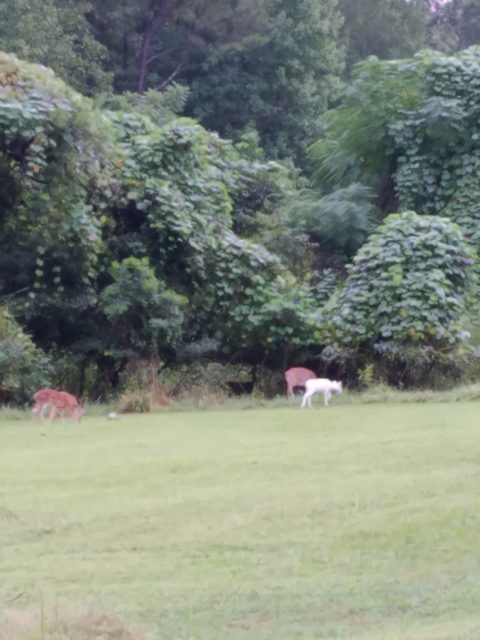 Side by side comparison picture – I had to do this just to be sure I am literally not nuts. I am not. The deer is doing the same thing in the pictures that we saw with our own two eyes – just grazing and nibbling at trees and berries: 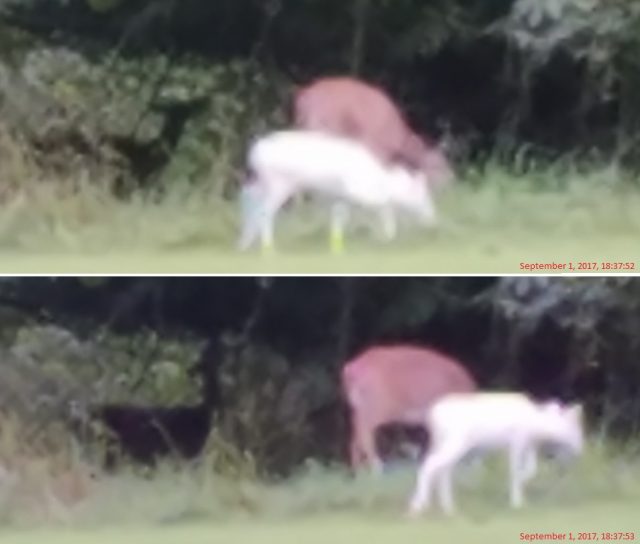 September 18, 2017, 17:21:06 – today we spotted the albino deer. Unfortunately, the black deer is not in the picture (I don’ think), but at least we can see this fawn in the exact same place 17 days later and see how much larger he or she has gotten (and also confirm this is not a wild sheep or something): 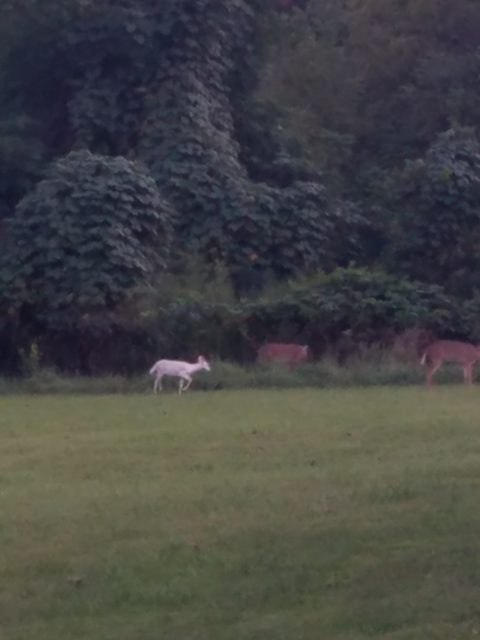 Tonight I went and stalked the deer. I spotted the albino. I sat still for over 30 minutes watching the albino and then I spotted the black deer! I still could not believe my own eyes. Unfortunately, it was getting dark out. I had my “good” camera but I was only able to get one shot of it before the camera quit taking pictures. It is a Nikon D5200 and it won’t take pictures if it doesn’t have enough light coming in to the lens. Anyways, I did get one very terrible picture, which I’ll post below: 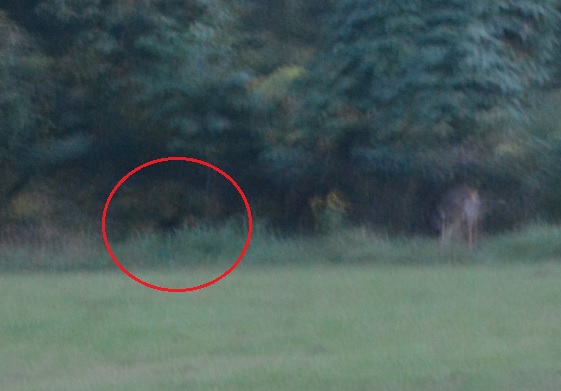 Crazy right?! If you that was crazy, check out this HERD of calico whitetails I found on YouTube:

Update, December 6, 2017: I almost forgot to post this article to the web. This article is going live now. Deer hunting season in Chatham County is underway and apparently nobody has shot the deer yet as I’ve heard absolutely nothing about it.

Have you ever seen a black whitetail deer?

After reading online about various animals which can be melanistic I discovered that black panthers are actually melanistic panthers (thanks Wikipedia). So it does happen with all sorts of mammals, it is just very very very rare for deer to be melanistic. If you have seen a melanistic deer or an albino deer or any other strange deer, please feel free to chime in below.