News organizations are allowing ad networks to display Fake News and fraudulent website scams on their sites via content delivery platforms and ad networks. Will the FTC take action against these publishers and advertising platforms, or continue to allow Americans to be scammed out of millions of dollars?

I have been documenting quite a few scams on this site lately, just because, well, nobody else is doing it. People email me and thank me for it every day. In fact, one reader’s response was so thorough it is now its own article: Rob Gronkowski Fake News Primal XL [Scam].

Unsuspecting users are being tricked into signing up for “free samples” of testosterone boosting, skin beauty, weight loss and brain enhancing supplements. Many of these people would not normally be tricked except they clicked on a headline on their local news website.

Even major publishers such as CNN are occasionally serving these “ads”.

Once people arrive at the destination site, they are tricked into paying the shipping and handling fees of a new pill only to later find out they’re being billed $90 – $100/mo from a company and they have no idea how to stop the recurring charges on their credit card.

There are several problems here:

The FTC is aware of the problem and has charged companies in the past. They still recommend that people turn in these websites but the sites keep popping up.

My local news station is WRAL. They have been running deceptive Newsmax advertisements for several months now. Thousands and thousands of people have read my scam articles, which tells me that tens of thousands of people are being ripped off. If I didn’t have morals I’d jump right into this deceptive practice and become a millionaire. It’s very easy to set up a fraudulent website and trick people, especially when reputable news organizations will knowingly post your ads for you for only a few cents.

This is what the newsmax ads look like on WRAL: 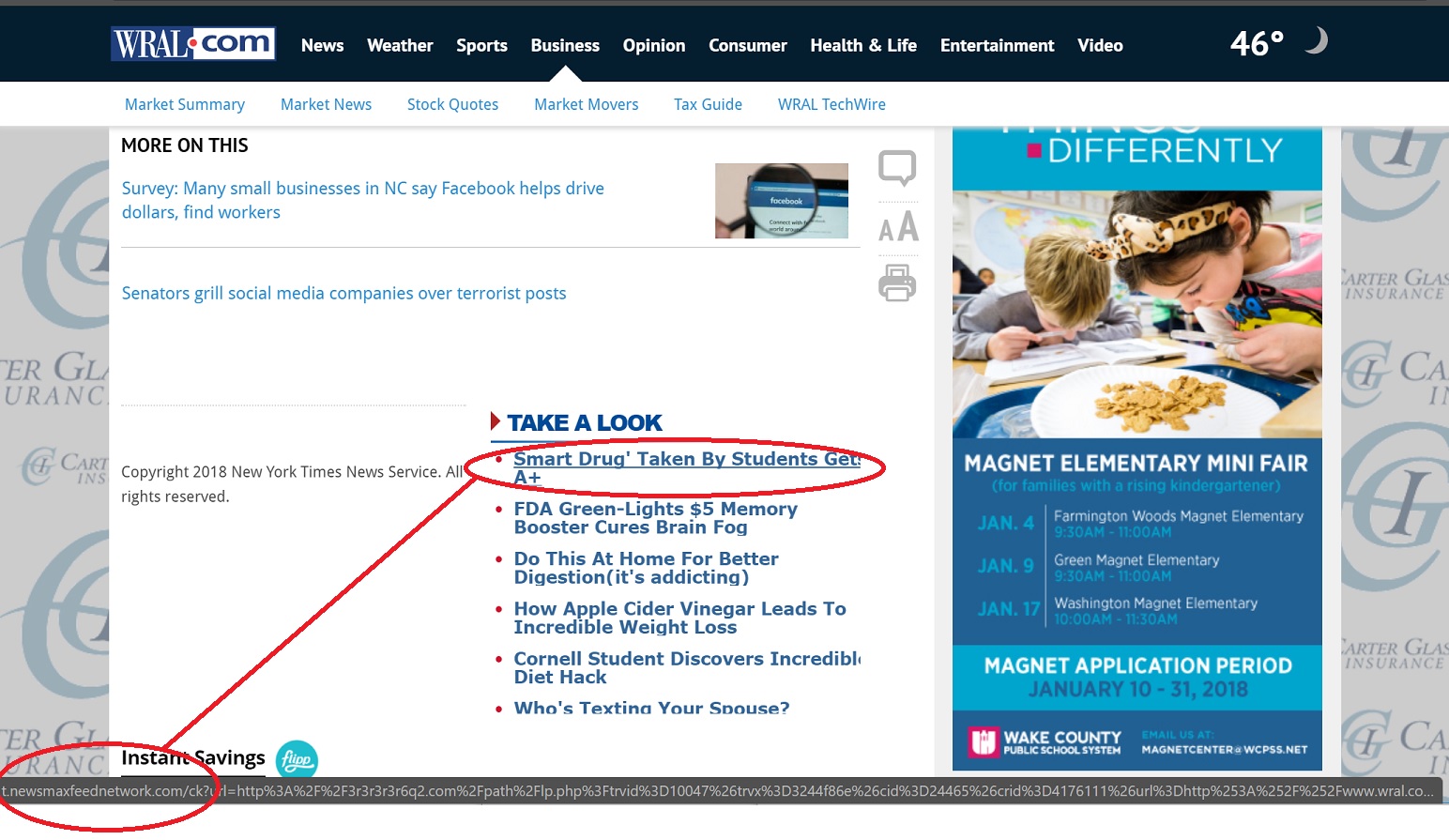 How the scam works:

A complete break down of how the brain boosting scam works is available here.

I think website owners, especially trusted news organizations, need to take some kind of responsibility for what is on their website. They can’t just hide behind “I had no idea” anymore. The problem is glaringly obvious, and at this point consumers are losing millions of dollars. The idea of trying to profit 15 cents from an ad click when a user may lose several hundred dollars is ridiculous. That’s like when a meth addict steals a $9,000 air conditioner unit to get $25 for the copper in it. It’s just… wrong. Would you knowingly buy new HVAC units from a meth addict just to make a few bucks?

I think the FTC needs to take action against the advertisers pushing these ads and the publishers knowingly allowing them to be displayed on their website.

Believe it or not, one of the worst offenders is Yahoo. Yahoo’s home page is loaded with spam and malware.

Is this Fake News?

Almost all of the scams involve completely fake news. The websites are NOT Fox News, they just look like Fox News and say “Fox News” at the top. They also include quotes from Bill Gates, Donald Trump, Bill Nye, Stephen Hawking and more. Other times the stories are completely made up and about Shark Tank, Vanna White, Amazon, Sally Field,

In fact, if you’re an advertiser on one of these news networks it appears they’ll let you put anything you want up as an advertisement, no matter how untrue it is.

In the case of WRAL above, people have absolutely no idea that they’re clicking on an advertisement. The headlines are indeed Fake. Essentially, news organizations all over the world are knowingly distributing Fake News.