What Panda 4.0 Means for Your Business 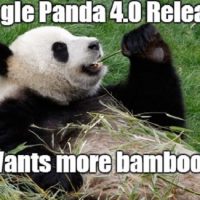 What is Panda 4.0? The Panda update is an algorithm update which Google started rolling out in 2011. It has gone through several changes. The 4.0 designation for this update which Matt Cutts announced on Twitter tells us that it is more significant than other recent Panda

Read more →
Back to Top